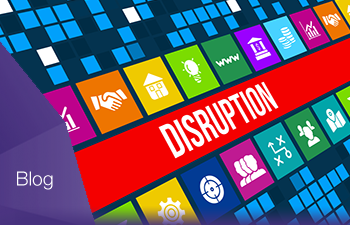 Now let’s compare this to innovation.  A good example of innovation is a new car model with new features such as automatic breaking system, reverse camera, sensor lights or seat heaters etc.  Since cars already exist and are targeted for certain segments of the market, any improvements or developments in the style of seating or better driving aids cannot be considered disruptive, but just innovative, that is unless we have ‘self-driving’ cars.

Disruption is about a complete transformation of the way people do things, not just an improvement of the existing state of play.  It is the end of ‘business as usual’.  By creating new markets, disruptive technologies do not play at the competitor saturation points, they create their own new and separate entry point.  I mentioned new car models when I spoke about innovation, but before the innovations in the automobile industry became a norm, a car in itself was a disruptive innovation because it created an opportunity rather than taking advantage of an existing one.  As Henry Ford once said, “If I had asked my customers what they wanted, they would have told me a faster horse.” Cars changed the way we travelled, and while the purpose of getting from point A to point B did not change, the travel became smoother, more convenient and easier because a car was not going to die of disease or needed to be fed. In other words, it made the horse obsolete!

So if you are considering stepping out of your comfort zone and trying to identify a disruptive technology that will give you the edge, ask yourself if it ticks all three of the following boxes:

– The technology changes your company’s ‘business as usual’.

– You have never even thought of a solution like this in existence.

– There are no competing products or products that offer the same solution on market.

So go on and disrupt yourself.  Make your time-consuming and complex processes obsolete, before your competitors do.

What better way to learn more about a visual platform than seeing it in action? Register for an Encompass webinar, watch previous webinars and explore the world of commercial information management.