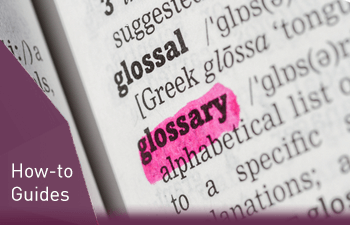 We have compiled this glossary of terms that are used within the Insolvency and Restructuring sector. We hope this list helps understand some of the jargon within the business.

If you have any suggestions to add, feel free to contact us.

When a company has hit financial difficulties. An Administrator takes charge of the company during this period. Administration also protects the company from it’s creditors.

An individual, who is appointed by the court, that acts as the controller of the company while it is in administration.

An application to the court to cancel a Bankruptcy order.

Any property and goods that belong to a company.

An order made against an individual. The order signifies that the individual can not pay their debts, and their assets are distributed amongst their creditors.

A County Court Judgement, when a company or individual can take you to court as you have not paid a debt. The court will order you to pay the debt within a certain amount of time.

A type of security that includes a floating charge over the company’s assets.

A sum of money that is distributed, usually annually, to a company’s creditors.

An individual that owes money to a company or individual.

Where goods are seized and are sold off towards payments of a debt.

A type of security held over pre-determined assets. This prevents the debtor from dealing with those assets without the consent of creditor.

A type of security held over general assets of the company which may change from time to time during the course of the business. The company can continue to use these assets until an event of default occurs.

The amounts owed by a company or individual to its creditors.

The licensed insolvency practitioner appointed to wind up a company.

A licensed insolvency practitioner that assists in proposing a deal to a company’s creditors.

A civil servant that works for the Department of Trade and Industry, who oversees the affairs of the company in liquidation.

A guarantee given by an individual, who agrees to be responsible for the financial liabilities of a company.

An individual who is appointed by a secured creditor that is holding a floating charge over a company’s assets.

A creditor who has security over some of the company’s assets, usually in the form of debenture or a charge.

An individual who is not registered as a director, however their instructions are followed by directors and employees of the company.

Any creditor that does not hold security over any assets that the company owns.

An order made by the court to have the company be placed into compulsory liquidation.