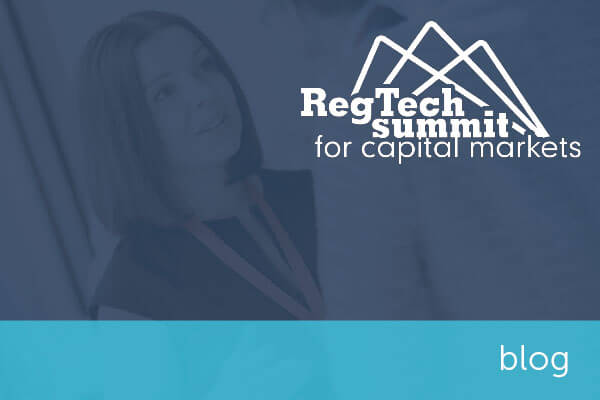 Taking place at the Guoman Tower Hotel at St Katharine Docks, the encompass team were pleased to attend and exhibit at the RegTech Summit for Capital Markets, organised by A-Team Group.

The conference has grown to become one of the most prominent RegTech conferences over recent years, and this year saw some of the most exulted names in the industry take their place on the speaker’s podium. With practitioners, RegTech experts and large financial institutions all in attendance, we were in eager anticipation of what was to follow.

The keynote speakers were all excellent, bringing their wealth of industry knowledge and experience to bear. Here, we have focused on Sophia Bantanidis, representing Citi Group, who opened the conference. It was fantastic to hear from her the role that she sees RegTech playing in the market from the perspective of one of the world’s largest banks.

The speakers touched on a number of areas that are of prime importance to us here at encompass, including an examination of the relationship between RegTech and regulatory landscape; RegTech and its relationship with FInTech; trends in RegTech; challenges, and work in the FinTech sector.

On the work that banks are carrying out internally, it is interesting to note that many are investing in innovation labs over the whole globe. The fact that they are doing so clearly illustrates the importance that FinTech – and to some degree RegTech – is shaping global regulatory requirements.

It was noted that in the realm of KYC, new regulatory requirements have made the process more problematic for big banks. There is a definite need for banks to use third party data and this is for two reasons. Using data from in-house sources is slow and cumbersome to make use of as it can be held on disparate systems and requires manual extraction. Moreover, all banks have an issue with legacy systems that make the extraction of data difficult while lowering quality.

One issue that was expanded upon was that for banks to work successfully with Regtech firms, requires clear direction from the regulators. The FCA has been rightly commended for their work in this field, with innovations like the regulatory sandbox playing a positive role in the development of FinTech and RegTech solutions. Moving forward, the UK government will require a positive dialogue with the EU and FInancial Action Task Force, the supra-national body that proposes Anti-Money Laundering and Counter Terrorism legislation.

The day posed a number of questions that the industry needs to answer to ensure that RegTech plays a positive role within financial institutions. These included:

From the various panel discussions we also learned some interesting statistics in relation to client onboarding.

As we increase our participation at events such as the RegTech Summit, it is interesting to note how the discussion around RegTech continues to evolve and develop. A few years ago, it is highly unlikely that RegTech would have been a consideration for big banks. Following the success of FinTech, and the impact it has made on the financial services sector, we now see RegTech following suit.

As a result, it was an excellent opportunity for us at encompass to demonstrate the power of our RegTech solution encompass confirm. My colleague Mahesh Jugoo very ably demonstrated this to attendees and it was of great pride to all of us that it was unanimously well received by all. I’m delighted to share the slides below.

Simon is an accomplished business leader with over 15 years experience across data, software and consultancy. His broad experience includes detailed knowledge of risk and compliance, having worked with many financial institutions as well as corporates across the globe. Simon has operated in global markets for over 10 years, and his international experience includes living in Singapore and New York.

Simon is responsible for helping global organisations in their implementation of KYC and AML solutions. He has been involved in multiple remediation projects for banks and currently helps financial organisations with intelligent process automation.

Connect with Simon on LinkedIn.

Founded in 2011 by entrepreneurs Roger Carson and Wayne Johnson, and operating from the UK, encompass is the creator of unique, innovative KYC software for banking, finance, legal and accountancy that enable better, faster commercial decisions. The company is driven by the belief that the best decisions are made when people understand the full picture.

Contact us today to arrange your personalised consultation of encompass verify.

Discover how our KYC automation software can help your business accelerate onboarding and give you peace of mind that you are regulator ready.