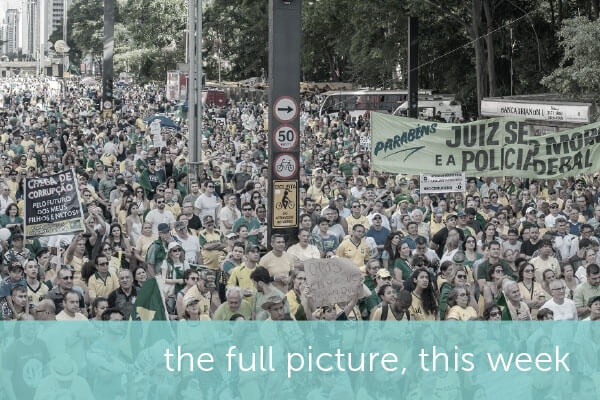 In our weekly roundups, the encompass team take you through all the breaking news on Know Your Customer (KYC), compliance and financial crime, keeping you informed at all times.

This week we take in a whistle-stop tour of the globe, taking in news from the UK, Ireland, Australia, Russia and the Middle East.

The outgoing head of Europol, Rob Wainwright has given an interview to Politico in which he states that one of his major frustrations is Europe’s inability to tackle sustained levels of money laundering. The former MI5 analyst cites the independence of each Financial Intelligence Unit of nation states as one of the main reasons why money launderers – who are uninhibited by national boundaries – are able to launder their wealth. Here’s a flavour of what he said:

“One of my favourite frustrations is on financial crime – the anti-money laundering regime. We have created a whole ton of regulations… the banks are spending $20 billion a year to run the compliance regime… and we are seizing 1 percent of criminal assets every year in Europe.”

Ireland is running the risk of being referred to the EU Court of Justice if it does not transpose the EU’s Fourth Money Laundering Directive into state law. The legislation, which was to be enacted by June 2017, has as yet, not been passed by the Irish Parliament. In the UK, the corresponding law was passed within the 2017 Money Laundering Regulations. A spokesman from the Irish Department of Justice stated that the “complex” nature of the Irish legal system had resulted in input from several different departments, but they were confident of having a Bill in front of Parliament by next month.

Slightly further afield, the incoming boss of the Australian Transactions Reports & Analysis Centre (AUSTRAC), Nicole Rose, has announced that she has been shocked at the levels of money laundering in Australia. While commenting that she is confident that all Australian banks are now fully onboard with money laundering legislation, Ms Rose has inherited AUSTRACs case against Commonwealth Bank, in which it is alleged the bank broke 54,000 money laundering laws.

From Ireland, to Australia… to South America, where in an exclusive interview in Americas Quarterly, three senior figures in the fight against illicit crime give their views on the Car Wash scandal in Brazil, in which $1.4 billion was laundered. After the fraud was realised in 2013, 28 major organisations and 20 political parties were investigated, leading to over 100 prosecutions. In this interview, Sérgio Moro, the federal judge overseeing the Car Wash investigations; José Ugaz, the former chair of Transparency International; and Claudio X. González, the president and co-founder of Mexicanos Contra la Corrupción y la Impunidad, a civil society organisation in Mexico leading the push for transparency and accountability in government, discuss the far-reaching effects of the case, and the views of South American’s on tackling corruption and money laundering.

And our global tour does not stop there, as we take in news from the Middle East, where Crown Prince Mohammed bin Salman of Saudi Arabia has doubled-down on opening up the country to investors by tackling corruption. In a statement released Tuesday, Saudi Arabia’s top prosecutor said that following the crackdown on top princes and officials in November, they would now begin to focus on lower-level offences.

And a tour of money laundering regimes wouldn’t be complete without a stop at Moscow… Stratfor report that one of the top oligarchs in Russia has been arrested on money laundering allegations. The report notes that cynics surmise the arrest coincides with a growing number of anti-corruption protests in Russia. Ziyavudin Magomedov is worth a reported $1.4 billion, and is perhaps notable to western readers as his firm built the Baltic Arena stadium in Kaliningrad, where England are due to play a World Cup match in June.

Homeward bound now. Property Industry Eye have queried why HMRC have not broken down the fines given out to firms by sector, as we do not currently know how many estate agents have been sanctioned for money laundering offences. This follows speculations that as much as one-fifth of all fines were handed to estate agents.

Forbes Middle East have published an excellent overview on how RegTech can help to solve compliance issues within the financial services sector, noting that:

“RegTech has the potential to enhance the ability, speed and efficiency of financial institutions to analyze and share data to detect financial crime and report it according to regulatory requirements.”

Separately, Big Law Business has written on how RegTech can help law firms in their compliance. They write:

“The adoption of RegTech for its own compliance and business operations could give a firm the ability to increase both its efficiency and scalability.”

Simon Johnson, a former chief economist of the IMF, and a professor at MIT Sloan, asks in Project Syndicate whether tightening of regulations for tech firms is required following the death of a pedestrian by a self-driving Uber, and the Facebook data breach. He has concluded that while tight regulations for financial services are required because they hold the possibility of bringing down whole economies should they fail, tech firms do not hold the same monopoly on services and thus is not required.

A report from the University of Nottingham and reported in The Telegraph has found that the use of robots, as well as offshoring some jobs to cheaper jurisdictions, can actually create more, and better paid jobs. The Telegraph story also reports the Organisation for Economic Cooperation and Development (OECD) which has concluded that the statistic of 47% of US jobs being at risk as a result of automation, as being overstated.

In further good news for robots, intelligent process automation (IPA) has been shown to be saving time and money for businesses across sectors, particularly financial services. The article in Robotics Business Review states that the global market for IPA software will be as much as $2.2 billion by 2021. This is backed-up by Information Age which has shown how IPA can be the saviour of banks tackling new GDPR requirements. They write:

“A software robot becomes a virtual compliance officer of immense ability, capable of penetrating into the furthest recesses of any set of disparate systems so it can examine and retrieve information just as any skilled member of staff would, but with much greater efficiency. From this data-labyrinth, IPA robots can provide the single version of the truth that is required, but at a speed, scale and level of security that humans simply cannot achieve.”

Finishing a little closer to home, the Scottish Government is to make available a further £200,000 to help teach digital skills in Scotland. The fund has supported 143 organisations teach 15,000 individuals in Scotland since its launch in 2014.

In the biggest AI news of the week, French President Emmanuel Macron has announced a new EUR 1.5 billion fund to help make France a global leader in AI. The French President gave a particularly nuanced interview to Wired, in which he cited healthcare and transportation as two of the biggest areas in which AI could make an impact, as well as touching on the social, legal and moral implications of the technology.

Two words you might not expect to see together in the same sentence are “AI” and “McDonald’s”. However the use of AI by the global fast food leader is exactly the take of an article by Bernard Marr in Forbes. As with other industries, McDonald’s have recognised the need to improve efficiencies while cutting costs, which leads invariably to robotics and AI.

But anyway, the parliamentary under secretary for the Department of Health and Social Care, Lord James O’Shaughnessy, speaking at a Spectator Health Summit, has said the data held by the NHS could revolutionise healthcare in the UK, provided the public could be convinced of the benefits and fears over data leaks allayed.

And at another conference, this time Dod’s Public Sector ICT event in London, Brigid McBride, HMRC’s acting digital transformation director, has said HMRC are considering the use of AI in complex tax and compliance cases. She also revealed that HMRC was already using a robot helper, named Rita, to help with some queries.

Two of the three founders of a virtual currency which raised $32m last year, and won support from celebrities including Floyd Mayweather, have been arrested for securities and wire fraud offences in the US. The two co-founders of Centra virtual currency did not have authorisation from Mastercard or Visa and mislead investors on a number of fronts. The New York Times report these are the first arrests made as a result of initial coin offerings.

A number of regulators across the planet have been talking about legislation in reference to cryptocurrencies this week, including; the Taiwanese central bank proposing Bitcoin be subject to money laundering regulations; Australian guidelines being passed referencing the same; and South Africa’s regulators considering further strengthening of regulations.

Separately the US is considering adding digital currency addresses affiliated with individuals and entities identified to the List of Specially Designated Nationals and Blocked Persons (“SDN List”). This would put U.S. persons on notice that doing business with those digital addresses may be prohibited, increasing compliance considerations for businesses delving into the world of virtual currency.

Finally, supply chain managers across the globe will be considering what the recent escalation in tensions between the two foremost economies will mean for them. The US tariffs announced last week, have now been met with reciprocal tariffs from the Chinese, with speculation mounting that Donald Trump may double-down on the US position by announcing further tariffs. The New York Times covers the recent stock market tumble as investors become more nervous; the Washington Post asks who will win, or more likely, who will lose less; the Guardian looks at Trump’s position, and what he will do next; and CNBC consider whether the US and China are now in a full blown trade war.