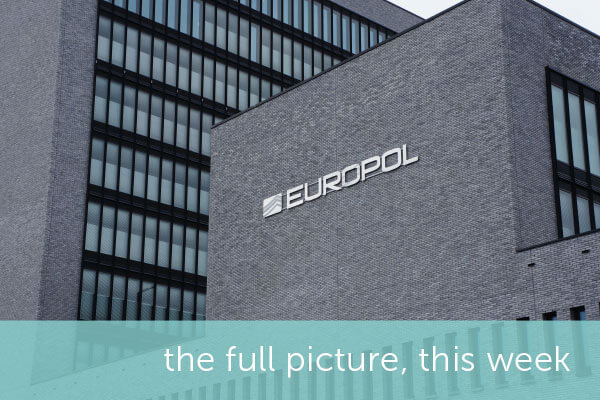 In our weekly roundups, the encompass team take you through all the breaking news on Know Your Customer (KYC), compliance and financial crime, keeping you informed at all times.

A master criminal responsible for the theft of almost €1 billion has been caught and arrested in Spain. The unnamed individual utilised the malware Carbanak and Cobalt, targeting banks and forcing them to dispense cash from ATMs to awaiting mules or adding funds to account balances before siphoning off the increase.

The UK Government has published a new guidance paper on the subject of Anti-Money Laundering (AML). Specific guidelines for accountants has been produced by the Consultative Committee of Accountancy Bodies on behalf of HM Revenues & Customs.

John Mann MP, the chair of the Treasury subcommittee, has written an op-ed in the Guardian calling for the end of tax havens, writing that “it is an insult to diligent taxpayers that multinational firms and high-net-worth individuals can use a complex myriad of loopholes and accounting gymnastics to minimise their tax bill.”

Further afield, the European Commission has beefed up its rules in relation to EU funds for development and investment being transited through “blacklisted” countries. New guidelines passed will stop the practice altogether.

Ali Sadr Hashemi Nejad, an Iranian national, has been arrested and charged with money laundering in Virginia, United States. He was arrested following allegations that he disguised the source of his $115m to conceal that it was Iranian in origin, thus violating US sanctions against Iran.

Repercussions from the nerve agent attack in Salisbury continue to dominate headlines in the UK. This week it was reported that while Sergei Skripal remains in a critical condition, his daughter Yulia is no longer in a critical condition. Separately, reports are surfacing that the poison may have been spread on their front door.

The political impact has been enormous. Following the UK expulsion of 23 Russian diplomats last week, the EU and NATO allies of the UK have followed suit. The bulk of the EU member states have evicted diplomats, NATO has reduced the Russian headcount by one third, and the US has evicted 60. The US has further closed the Russian Consulate in Seattle. Russia has promised recriminations, and a tit-for-tat expulsion of diplomats from western countries now looks likely. The BBC has examined what impact the ejection of its diplomats will have on Moscow.

The American expulsions have surprised many commentators in the US, as Bloomberg reports. Only last week, Donald Trump congratulated Vladimir Putin on his re-election, but has now led the largest expulsion of spies since 1986. The New York Times report:

Mr. Trump, who energetically comments on almost any other subject on Twitter or in encounters with reporters, stayed conspicuously silent on the showdown with Russia on Monday, leaving it to aides to explain his decision.

“The only real conclusion to draw is there is something of a divide,” said Thomas Wright, the director of the Brookings Institution’s Center on the United States and Europe. “They may have convinced him to sign off, but he doesn’t want to be the face of it. He could have resolved this any day with a 10-minute appearance. That’s the part that’s puzzling to me.”

The issue of Russian wealth in London and the city has continued to generate headlines. Tom Keatinge of the Centre for Financial Crime and Security Studies, RUSI, has looked at the reasons why the City continues to be awash with Russian money.

Channel 4 has broken from the thread, and has produced a substantive read on whether the UK’s case against Russian involvement adds up. They examine the case for and against the use of Novichok, both by Russia and other states, before ultimately concluding that until further details of the police investigation are released, it is difficult to come to a definite conclusion.

The only story that could possibly keep Salisbury off the front pages is the continuing scandal of the Facebook / Cambridge Analytica (CA) data breach. On Tuesday, the former CA employee turned whistleblower, Christopher Wylie gave evidence to MPs. Amongst his shocking revelations include assertions that:

Following his testimony to the Culture, Media and Sport Select Committee, chair Damian Collins called for Facebook CEO Mark Zuckerberg to give evidence. Politicians of all stripes have reacted with astonishment that despite Zuckerberg pledging to make Facebook more transparent, he is instead sending a deputy to testify before MPs. He is however, potentially amiable to testifying before US Congress.

In America, the Federal Trade Commission will be initiating an investigation, following the lead of the Information Commissioner’s investigation in the UK.

The negative reaction against Facebook has continued, with Politico picking up on the difficulties of escaping the tangled web of Facebook owned apps, including Messenger, Instagram and WhatsApp. On Wednesday, Channel 4 News reported that despite Facebook’s statements that all CA data would be deleted, this in fact, has not happened.

On Sunday, Facebook took out full newspaper ads to apologise for the furore, saying that “we have a responsibility to protect your data, and if we can’t then we don’t deserve to serve you”. As well as impacting on Facebook’s stock price, Reuters have noted that Americans are now less likely to trust Facebook than other social networks. In another blow to Facebook, in light of the allegations, The New York Times have reported that Alex Stamos, Facebook’s chief information security officer, will be departing the company.

One interested observer that has yet to pass comment, is Robert Mueller. According to the Independent, the Special Counsel will be scrutinising links between the Trump campaign and Cambridge Analytica for possible evidence of collaboration.

Donald Trump’s administration is considering a crackdown on sectors that Chinese investors can place their money utilising so-called emergency laws. Areas such as 5G wireless and semiconductors could be impacted in a ramp up of the US Government’s punishment of China for breaching intellectual property rights.

Two Japanese banks have signed deals with tech firms to enhance their utilisation of AI. Mizuho Financial Group joined with IBM while Bank of Tokyo-Mitsubishi invested in ExaWizards, an AI specialist. Staying on the AI theme, Computerworld UK sat down with Ajwad Hashim, vice president for innovation and emerging tech at Barclays to discuss the four biggest threats to the banking sector posed by AI. And on the impact of AI in the legal sector, New Zealand firm MinterEllisonRuddWatts have been developing their own AI that can read and develop contracts; technology that could save the firm millions, but potentially also lead to job losses. This theme has been developed further by BusinessCloud, who in an interview with Paul Knight of Mills & Reeve has said that the rise of AI will mean that in the future there are less law firms in the UK. Here’s a flavour of what he said:

AI is going to take on the role that a lot of junior lawyers and paralegals currently perform at law firms. There won’t be the need for lawyers to review hundreds of documents or produce the first draft of a contract. The role should become more interesting, with the focus being on developing advisory skills, not processing and managing documents.

As we first reported last week, the creation of the UK FinTech hub has generated more headlines, with Finextra following up with an interview with Dave Ramsden, deputy governor of markets and banking, Bank of England. He said: “Given the size of the financial sector in the UK, I can see fintech driving competition and a pick-up in productivity in the medium term.” Further coverage can be found in Banking Technology, with both focusing on Ramsden’s presentation.

Finally in Forbes, contributor Tom Groenfeldt has written that banks need to embrace technology such as RegTech in order to stay ahead of current and impending legislation and remain compliant. He argues that the vast quantities of regulations means that this is now virtually impossible without the assistance of technology.

We wrote two weeks ago on the aspirations of the small island of Malta to become the blockchain capital of the world. Now the Mediterranean country has persuaded Binance, the world’s largest cryptocurrency exchange with a $1.7 billion daily trading volume, to relocate to the island. Aspirations, indeed!

Closer to home, Business Minister John Glen has been speaking to Business Insider, where he says that there is no reason why London cannot have a flourishing cryptocurrency exchange. Whether he was aware of Binance’s move to Malta or not, we can’t confirm…

One bank who have nailed their colours to the mast on the subject however is Danske Bank, the largest bank in Denmark. Business Insider cite Danske as stating:

Danske Bank is worried that cryptocurrencies lack investor and consumer protection, are highly volatile with a non-transparent price formation and that the lack of regulatory control have made them targets for criminal purposes including extortion.

In the spotlight: Adam Jones, Head of Partnerships, Europe

By Cheri Burns | June 16th 2021 We put the spotlight on Head of Partnerships in Europe, Adam Jones, as he reflects on his career.
Read

By Roger Carson | June 9th 2021 We examine the factors contributing to increased investment in the RegTech industry.
Read