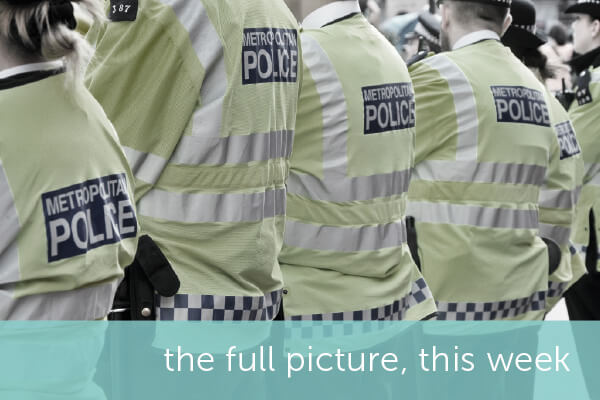 In our weekly roundups, the encompass team take you through all the breaking news on Know Your Customer (KYC), compliance and financial crime, keeping you informed at all times. This week, we look at new money laundering Bills being placed by the governments of the UK and New Zealand, what the future holds for humans after robots have taken all jobs, and an in-depth review of state-sponsored trolling.

We’re visiting slightly less of the planet today as we commence our round-up of financial crime news. That said, we have big news from the UK as the government launches new money laundering legislation, as well as stops in Canada and New Zealand.

UK
The UK Government has confirmed that despite leaving the European Union, it will implement the 5th Money Laundering Directive (5 MLD) in full. In a letter drafted by Lord Henley, addressed to Labour MP Margaret Hodge, he confirms the decision of the Department for Business, Energy and Industrial Strategy (BEIS) for which he is responsible. The Directive must be implemented by national governments by January 10th 2020. The move has been welcomed by both Margaret Hodge, and by campaign groups. Hodge said:

“This is a welcome further step in our big campaign to eradicate dirty money and tax avoidance in the UK. Britain’s crown dependencies should now come into line and agree that they too will adopt public registers of beneficial ownership.”

“This is great news. At least in this area the UK will not pursue a post-Brexit race to the bottom on financial secrecy. This decision will help establish the fifth directive and its position on public registers as the international standard.”

Law firms are under increasing pressure to meet the requirements of anti-money laundering legislation (AML), with law firms averaging four hours a week discussing requirements for AML provisions. The news came in a new report from the Law Commission discussing Suspicious Activity Reports (SARs) – “Anti-Money Laundering: the SARS Regime”. The Commission has made several recommendations to alleviate the burden on law firms, including introducing guidelines on what firms should be looking for, the introduction of new tools that could help investigators and focussing only on high-quality reports. Law firms have taken regular criticism for producing only a very small fraction of the total number of SARs compared to the financial sector.

Crooks are laundering money using stolen credit cards on popular mobile games such as Clash of Clans, a new report has stated. Using fake Apple IDs, thieves used the details to buy virtual goods which were then sold on third party websites. Security firm Kromtech who conducted the report said the size of the Clash of Clans community made it an excellent place to launder money.

Separately, new draft laws laid before parliament on Monday (23rd July) will see those who conceal their identity when buying UK property sentenced with unlimited fines and up to five years in prison. Foreign companies owning UK properties will now be required to reveal their ultimate owners on the world’s first public register of overseas entities’ beneficial ownership. The new laws were proposed as part of the Criminal Finances Act 2017, which has already seen powers such as Unexplained Wealth Orders brought to bear. London property, in particular, has been under the spotlight in recent times as vast swathes of exclusive addresses have been bought by shell companies based in tax havens such as Bermuda and the Caymans.

“These proposals finally put to paper a long-promised tool that will help lift the veil of secrecy over property ownership that corrupt individuals exploit here. After several years of campaigning and advocacy we are pleased that the first steps to introducing this important register have been made.”

“The government has finally shown it is serious about stopping criminals and the corrupt from using UK property to launder dirty cash. We’re excited to find out who really owns our cities.”

Canada
Andrew Simpson, writing in Bobsguide, has written on the dangers inherent for casinos posed by those wanting to launder money. He poses several red flags that casinos should be wary of including, currency exchanges, the source of funds used, accounts with very little activity and the designation of the beneficiaries.

New Zealand
The government of New Zealand has launched a new campaign to raise awareness of money laundering. Justice Minister, Andrew Little launched the “keep Our Money Clean” campaign as the New Zealand government moves into the second of its four-part phasing in of new money-laundering laws.

Japan
A new law that will make it legal for private enterprises to own casinos has been met with anger after it was shown that it could open the doors for Japanese criminal gangs to infiltrate the Japanese casino and gambling sector.

Barclays is to create 2,500 jobs in Glasgow as it builds a new tech hub in the city. Having secured £12.75m funding from Scottish Enterprise, the tech hub will look to foster innovation and collaboration.

Four years after launching, Facebook has closed its programme to bring internet capabilities to remote parts of the globe via solar powered drones. Named Aquilla, the programme based at Bridgewater in the UK will now be closed. Following the Cambridge Analytica scandal, and Mark Zuckerberg’s testimony before Congress in the US, he has given an exclusive interview to recode.

“In retrospect, I do think it’s fair to say that we were overly idealistic and focused on more of the good parts of what connecting people and giving people a voice can bring. I think now we understand that, given where we are, both the centrality of Facebook, but also, frankly, we’re a profitable enough company to have 20,000 people go work on reviewing content, so I think that means that we have a responsibility to go do that. That’s a different position than we were in five or six years ago, or even when we went public and were a meaningfully smaller company at that point.”

The EU could potentially be breaching its own GDPR rules for data protection, after campaigners found spreadsheets with event attendees personal details on the EUs website.

Bloomberg have taken an in-depth look at how Russia and other countries engage in state sponsored trolling, including using thousands of Facebook and Twitter handles.

Perhaps not yet often considered, but in the future, scientists may have to consider the “skin colour” of robots, after researchers found that humans show racial prejudices towards with different colours.

The Singapore banking system is putting preparations in place to make it a global leader in AI. A decade after investing heavily in data analytics capabilities, the United Overseas Bank (UOB) and OCBC Bank are committing up to 1,000 training places on AI.

With massive strides being taken in AI, researchers are now turning their attention to what humans will do if robots are able to do all jobs. The Drum considers whether we will have more time for leisure, fitness and family activities if there is no requirement to work. Foreign Policy also poses this question, examining the impact on states that have used low wage labour to grow their way out of poverty. Should robots take these jobs – what will be left for them?

The Guardian has taken an alternate view on AI technology, asking why so many journalistic pieces about AI are so far wide of the mark. Currently, writer Oscar Schwartz argues that there is too much emphasis on “killer robots” and giving robots “human rights” , as well as greatly exaggerating the current research taking place.

Banking Tech has written on the attempts of the administration of Jersey to turn itself into a leader in blockchain and cryptocurrency. The progress being made has led to Softbank – the world’s largest tech fund valued at £100 billion – moving to the island.