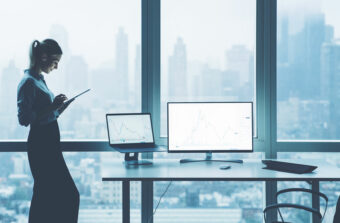 A recent white paper published by Themis and Encompass Corporation, the leading provider of Know Your Customer (KYC) and Anti-Money Laundering (AML) software, revealed new insight into the ‘cost’ of not adhering to financial crime compliance.

The whitepaper, titled Financial Crime Compliance: The Cost of Getting it Wrong, analyzed recent case studies and 2020 polling from Themis, targeted professionals across the financial services sector. One of the headline figures revealed that 30% of finance professionals had estimated the cost – both direct and indirect – of their businesses’ financial crime exposure to be £1 million or more.

In fact, direct financial loss was revealed to be the primary concern of financial crime for 36% of respondents. For comparison, 32% cited reputational damage and the associated customer loss as the biggest cause for concern, and, 15% said that follow up regulatory fines were the biggest issue for them.

However, the white paper suggested that Regulatory fines pose the most obvious, immediate and sometimes the most severe impact to company balance sheets. For example, in 2020, a bank was fined almost £40 million by the UK’s Financial Conduct Authority (FCA) for failing to maintain adequate AML systems and controls over a five-year period.

Similarly, in the Netherlands, ABN Amro reached a €480 million settlement, including a €300 million fine, after an investigation found it had overlooked numerous indications of money laundering and related financial crime. The penalty was four times larger than the company’s Q4 2020 net profit of €54 million.

Furthermore, the white paper also drew attention to a 2019 study which revealed that corporate reputation accounts for one third of stock market valuations. Themis therefore conducted an analysis of a sample of the most significant international stories of AML shortcomings since 2019, which indicated that across seven banks, the average share price loss one day after the regulatory probe was announced was 5.15%, falling to 20.71% six months following the announcement.

Clearly, many finance professionals still perceive a ‘criminals’ take’ as the biggest cause for monetary loss year after year. However, this is not necessarily true, and increasing regulatory impositions combined with the increasing importance of corporate reputation, means there are far more hidden costs than to financial non-compliance, than one might initially realise.

In 2021, there is no excuse to not have the correct regulatory technology in place, to help automate laborious compliance processes, and improve the efficiency and effectiveness of catching financial crime. All too often are finance professionals caught out, not for knowingly endorsing financial crime, but for not knowing it is going on right under their noses. Personal reputations and careers within the financial services sector may suffer as a result.