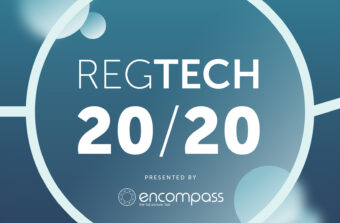 Industry leaders in the RegTech space have called for a reposition of global financial regulations, to a system that transcends national borders and values technology as a priority. This call to action was discussed by experts in the newest episode of the Encompass podcast, RegTech 20/20.

Joining presenter Alex Ford, VP, Product & Marketing at Encompass, for the podcast’s return after a break were Francis Gross, Senior Advisor at the European Central Bank (ECB), and Dr Henry Balani, academic and Head of Delivery & Customer Success at Encompass.

Mr Gross and Dr Balani discussed the shortcomings of the existing regulatory system – one which favours ‘richer’ countries and fails to effectively tackle financial crime and money laundering in countries where information is difficult to access and parties are hard to trace. Typically, this refers to countries with poorer infrastructure, usually with a lower than average GDP.

As an alternative, Mr Gross called for a “real-time global scale representation of events” that can allow an independent body to understand what’s going on and enforce regulations that are universal across all nations and territories.

This system would be enabled by state of the art technology and a vast network of data reporting, facilitated by the coordinated efforts of world leaders and national governments.

Whilst Mr Gross acknowledged that such a feat would be difficult, it would not be impossible, he said, concluding that “once [an idea] makes economic sense, people will rush to get there.”

When considering how we get there, he stated:

The migration path will be driven by economic forces, with businesses investing [in the system] to reduce their costs, increase their profits and innovate. It will need to be capitalised by political and regulatory action, and to get there politicians and the regulators need to put technology first.

Dr Balani agreed that current regulations are flawed, as they still exist in a pre-digital paradigm. He argued that we have the technology now to improve the regulatory system, and the only roadblocks are political complications, societal pressures, and some continuing mistrust in technology.

This topic of discussion was contextualised by Dr Balani’s recent research, which shows that Anti-Money Laundering (AML) directives result in a positive stock market valuation for EU financial institutions. The research revealed that these positive effects heavily favour banks in richer countries, while also showcasing that some repeat offenders for breaches of regulations were still benefiting from a boosted valuation, despite the fines, suggesting that the existing regulatory system fails to effectively address financial crime in Europe.

You can access the full podcast episode, and listen to others in the series, here or via any major podcast streaming platform, such as Spotify, Apple podcasts and Google podcasts.

The RegTech 20/20 podcast from Encompass, launched last year, puts the spotlight on key global issues in regulatory compliance and technology, with previous guests including senior figures from organisations such as Innovate Finance, The Financial Conduct Authority (FCA) and Australia’s RegTech Association.

Listen to the podcast.