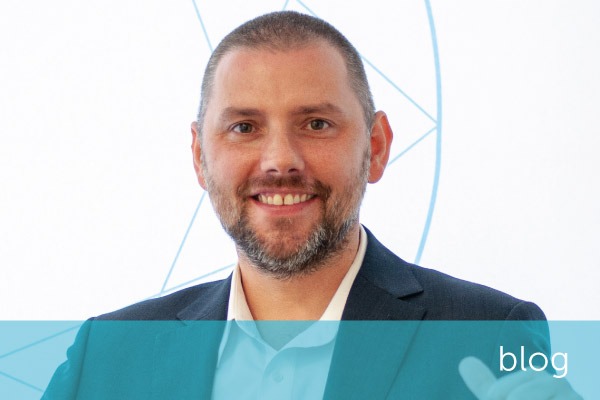 Szymon Szukalski’s journey with Encompass started as part of our Asia Pacific staff, in a team of fewer than 10 people, when we were solely based in Australia.

In the years that have followed, he has watched the company and our footprint grow significantly globally, steered our engineering function at the center of the business and, on a personal note, moved with his young family to Glasgow to become a key figure in the UK operation, too.

Here, he shares more on his time with the company, and why it is still an “adventure” years later…

What led to you joining Encompass?

I have a varied background, having started in the printing industry and worked in areas including real estate, marketing and geoscience. I was introduced to the company by a friend who worked for Encompass, after contracting in similar developer roles.

I had just come back from five months travelling around the world with my wife and decided to move to Melbourne, where I worked remotely for Encompass, after meeting the team in Sydney, of which there were eight members at that time!

How was moving to Glasgow?

Culturally, we are not too different. You have to learn the basics of life here but it is close enough to make it okay. Scottish humour is also similar to Australian, which made it easier. My sister was living in London when we first moved, too, so we spent more time with her and that was great.

Tell us about your role and how it has evolved…

Six of my nine years so far with Encompass were spent at the keyboard, in software development. During those years, I worked with colleagues to start our architecture group, with a view to addressing our future needs to scale the platform.

Encompass periodically sends people from Australia to Glasgow to meet the team, and vice versa. A few years ago I visited Glasgow for a month, which was exciting. At that point there was talk of bringing on a UK-based Head of Engineering, which I was interested in, so, less than a year later, my family and I completed our move.

Given my experience of and time at Encompass, I have been involved in a lot across the company, as well as looking after the office here in Glasgow. I have been able to spend time working with teams across functions and in front of customers, which I really enjoy, as it is about bringing my technical expertise of Encompass to the business.

That is what my new role as Chief Technical Advocate is focused on – working across the organization to provide thought leadership, technical client insight and ensure a more fluid technical interaction to help us succeed with and for customers.

How has the engineering team changed?

As time has moved on, there has obviously been some restructuring and adoption of different practices. We have changed from a single development team to multiple global groups, to meet customer demand and deliver the product more quickly.

The evolution of the team has been centerd on trying to scale and operate effectively between different countries, which can bring its own challenges. Key people have been brought in to help, which we are seeing the impact of.

How would you describe the company culture?

There are no egos. I appreciate the chance to speak openly, to our co-founders and throughout the company. Everyone is willing to chip in and help – it is a supportive environment. It is also great that we get the chance to work with people from all parts of the world.

which part of your job do you enjoy most?

I would say working with bright, dedicated people and having a laugh with everyone. We don’t take ourselves too seriously but still get the job done.

how would you sum up your time at Encompass so far?

Quite the adventure… A rewarding rollercoaster ride.

Find out more about careers at Encompass.